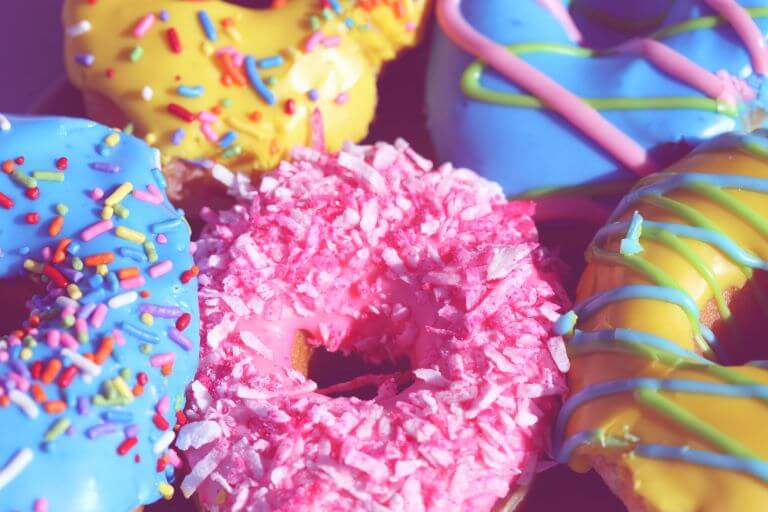 Doughnut is the official word for a piece of sweet fried dough often shaped like a ring while Donut is the shortened spelling. Both spellings are accepted and are used interchangeably. Regardless of how donut is spelled, donuts are a cherished sweet good. According to IRI, the doughnuts segment was up 3%, with total sales of $2.1 billion for 52 weeks ending December 27, 2020. Donut flavors inspired by the summer season and savory foods are on-trend while unique collaborations add excitement to the category.

For the summer season, Dunkin’ dropped Berry Powdered Donuts and Munchkins, which are an old-fashioned donut tossed in a sweet berry powder. Krispy Kreme debuted the Lemonade Glaze Collection in Lemonade Glazed Doughnut, Lemonade Glazed with Lemon Kreme Doughnut, Strawberry Lemonade Doughnut, and Pink Lemonade Cake Doughnut flavors. Tim Hortons added the Crème Filled Ring Donut, which features a yeast ring doughnut with a crème filling, topped with powdered sugar and a chocolate drizzle. Tastykake introduced Mini Donuts in Birthday Cake and Orange limited-summer flavors. Not seasonal, but a novel introduction is Dunkin’s extensive range of 40+ Vegan donuts, which was rolled out in Belgium. There are a variety of flavors such as Cinnamon Banana, Chocolate Speculoos, Lotus Sensation, Original Glazed, Maple Drizzle, Raspberry, and Strawberry.

Americans love Pizza. According to DoorDash’s Deep Dish 2021 midyear report, Cheese Pizza saw a 362% increase for the top ten foods on the rise. What better way to capture consumers’ attention than to create pizza-flavored donuts? To celebrate National Pizza Party Day, the Doughnut Project and Hormel Pepperoni Cup N’ Crisp teamed up on the “Cheese the Day” Donut. Each donut was made with homemade marinara sauce, fresh mozzarella, and a serving of Hormel Pepperoni Cup N’ Crisp. In honor of National Donut Day, DiGiorno pizza created DiGiornut, a DiGiorno pizza-flavored donut. The donut was stuffed with mozzarella cheese, topped with signature DiGiorno sauce, and classic pizza toppings. It was available exclusively through a Twitter sweepstakes and only ten winners were chosen to receive a half-dozen box each.

Donuts are the latest food group to develop fun and creative collaborations. For the first time in its history, Krispy Kreme Doughnuts partnered with Oreo’s on an all-new glaze for its doughnut in two flavors: Oreo Cookie Glazed Doughnut and Oreo Cookie Over-The-Top Doughnut. In the Philippines, K-pop girl group Blackpink and Krispy Kreme Doughnuts collaborated on the limited-edition “Love Sweet Series” that offered two Strawberry-filled donuts, one black and one pink. Doughnut Project and Hi-Chew teamed up on a limited-edition Strawberry Squeeze donut, which is based on the brand’s Strawberry Lemonade candy flavor.

Smartfood and Krispy Kreme Doughnuts co-branded on a limited-edition Original Glazed Doughnut popcorn snack. Coffee mate added a Glazed Donut creamer to its portfolio that “brings the sweetness of a glazed donut to the coffee cup.” Dunkin’ unexpectedly partnered with online paint retailer Backdrop. The brands co-created limited-edition paints in Dunkin’s iconic, bright pink and orange colors. The Donut Life Museum in Orange County recently opened to offer guests a donut experience. The interactive museum highlights multi-sensory immersive rooms that were inspired by the donut’s circular shape, which represents the circle of life.

Donuts are so well-liked that they are celebrated annually on the first Friday of June for National Doughnut Day. Expect to see new donut flavors, creative collaborations, and more food and beverages inspired by donuts.

PreviousGO TO BED, YOU SLEEPY HEAD – SLEEP-FOCUSED PRODUCTS TRENDING
NextPLEATHER IS OUT, VEGAN LEATHER ALTERNATIVES ARE IN – SUSTAINABLE FASHION IN DEMAND